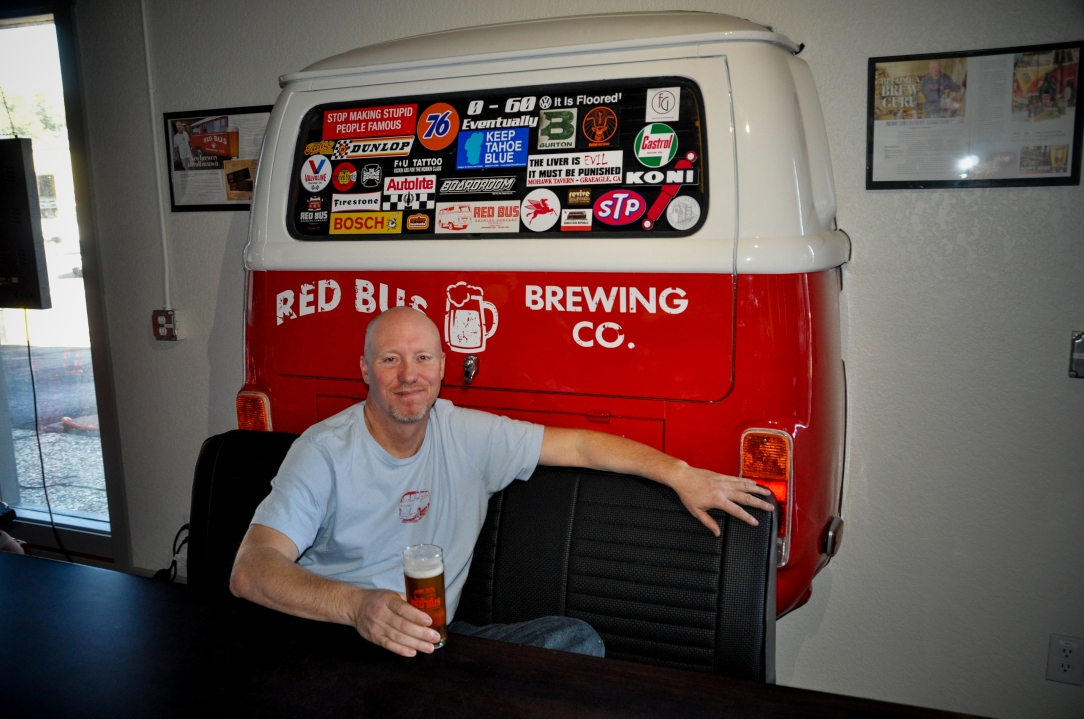 Sometimes you know when one of those life-changing moments are about to happen. A marriage for example, or the birth of your kids, but sometimes, you don’t see it coming until you’re flying over the handlebars of your mountain bike.

“I broke my jaw, broke both arms, I was in the hospital for a week,” says Erik Schmid, owner of Red Bus Brewing Company and Brewmeister homebrew shop.

It was the fall of 2015,. Schmid, an avid mountain biker, was flying down a South Lake Tahoe bike trail aptly named Mr. Toad’s Wild Ride. He says he was going too fast for the spot he was in and the next thing he remembers are hazy bits of a friend helping him up and an ambulance ride. The crash shattered his jaw, requiring multiple surgeries and left him a big scar where he had to have his left elbow rebuilt.

But the crash and recovery also left him with something else: a new outlook on life.

“I kind of came to the ‘life is too short conclusion,’” he says looking back. “That bicycle accident just kind of opened my eyes like, ‘Hey, if you’re going to do something, just go ahead and do it!’”

That “something” was to open his own brewery and on February 9, 2018, that decision and dream will come true when Red Bus Brewing officially opens its doors. “The brewery has always been on the back of my mind. That was the impetus to drive me forward to start looking at locations and putting a business plan together,” said Schmid.

THE LOGICAL NEXT STEP

Schmid is obviously not new to the region’s brewing industry. In 2005, the avid homebrewer with a Brewers Guild education purchased Brewmeister, the popular homebrewing store.

“I acquired it from the previous owner really out of frustration; I needed a shop that had a little more breadth and product. So it was really kind of selfish, I wanted more ingredients,” he says. “After owning it, I really quickly realized that if I was just to apply basic business practices, make it have more inventory and more things that people want it will probably grow.”

And grow it did. In no time, he was able to move to a large location in Folsom and open two additional locations in West Sacramento and Roseville. While growing his business he watched a number of his customers go from brewing at home to brewing for a living.

“Just about all the brewers that have Sacramento roots nowadays that are commercial brewers were all customers at one point or another,” he says. So opening a brewery himself was the next logical step. All he needed was a location.

Schmid knew he wanted to stay in Folsom. After all, there hadn’t been a production brewery in the city since the 1880s. But the industrial space that has become a popular destination for the region’s breweries is in short supply in Folsom. That’s when his realtor suggested using the same location as his homebrew shop. The idea of having his brewery and his homebrew shop under one roof immediately appealed to Schmid. And there is a precedent for this business model, craft beer giant Ballast Point started as a homebrew shop. And as fate would have it the business next to Brewmeister moved out and Schmid moved in.

“What’s cool about it is the whole premise is licensed,” says Schmid. “So if the homebrew shop happens to be open at the same time as the brewery you can go grab a beer and shop for ingredients.”

Running a business will building another has had its challenges. Brewmeister has had to be constantly moved around to make room for construction, though Schmid says it’s in its final spot now. But overall, he says because of his years running the homebrew shop and the connections he’s made, he had perhaps a better sense of what he was getting into than your average brewery startup. After all, he was homebrewing buddies with Andy Klein long before Klein opened Monk’s Cellar and Zach Frasher, Moonraker’s star brewer, was one of Schmid’s employees at the Roseville Brewmeister.

“They all told me it would cost double whatever you budget. It’s going to take you twice the amount of time,” he says. “We got pretty lucky. It took a long time to kind of formulate the plan, but it also allowed me to uncover a lot of things that people might not find if they were in a rush.”

Inspiration for a brewery name can come from just about anywhere. Many breweries are named for an iconic location (think New Helvetia or Crooked Lane), some after a historic figure (Ruhstaller, Sam Adams) and others are just named for things people are passionate about (Bike Dog).

So where did Schmid find his inspiration? On Craigslist. Sort of.

“I’m like four or five blocks off of Sutter Street where all the action is. I was trying to figure out a creative way to get people from Sutter Street and the parking garage to my brewery,” he explains. “I was looking at just Econoline vans to maybe get a shuttle service going. As I was looking for vans, this Volkswagen Bus just popped up in this Craigslist feed I was looking at.”

He and his father had always loved Volkswagens so he thought the bus would make for a perfect shuttle. His insurance agent couldn’t have disagreed more, not with the bus so much, but with the whole idea of a shuttle service. So Schmid was left with a bus and still no brewery brand until he started taking the bus and its “SUDSWGN” license plate out for a spin.

“Just driving it around and seeing the reaction I would get from people, of any age, was just smiles. It’s just a happy thing, it’s a fun thing. Everybody’s got a story if you’re older; your parents having one, you’re riding around in it, your buddy in college had one. And kids are just fascinated by them when they see it because they just never see them.”

That reaction was exactly the sort of feeling Schmid had been looking for so it only made sense to name and model his brewery after his bright red bus.

“I just love the vibe, and I’m like, ‘You know what that’s the kind of overall vibe of what I’m looking for.’ The whole concept here is just a fun, not-so-serious, simpler time kind of thing.”

Simple and fun. That’s the Red Bus experience summed up for Erik Schmid because he’s certainly not trying to conquer the beer world. 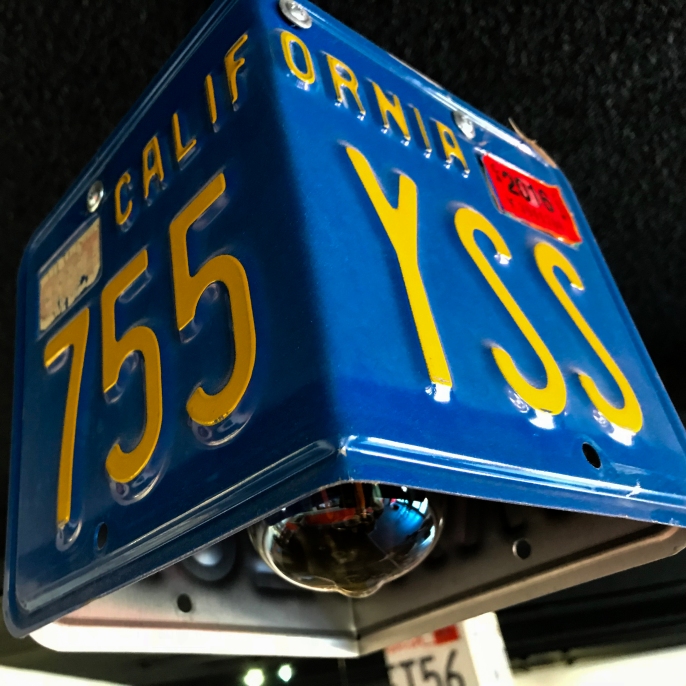 Light covers are made from license plates.

The VW logo emblazoned into the bar top

The simple fact that Red Bus Brewing will share a home with Brewmeister makes it automatically different than just about any other brewery in the region. You will be able to enjoy beers while shopping for beer ingredients or while taking beer-making classes. But for the most part, you’re going to find a small brewery in an industrial area not far from a residential neighborhood.

“(It’s) a warehouse brewery vibe but a little higher end than some of them. We spent quite a bit of money here making this nice.” The entire taproom is an homage to the Volkswagen bus it’s named after. A Volkswagen symbol is emblazoned on the bar top whose bumper uses replica Volkswagen seat material. Lights are wrapped in license plates and the beer is listed under “fluids”. But the centerpiece of the room is the back end of a VW Bus behind a vintage VW bench seat.

Nice enough, he hopes that nearby neighbors will just walk over. And like most breweries in the region kids and dogs are welcome. “I think the setting in terms of how it’s located within a city is very similar to the original Track 7 location.”

He says Red Bus will have about 10 beers on tap that are constantly changing. The beer will be mostly focused on European lager styles but that the brewery will, of course, make standard brewery fares like IPAs, Hazy IPAs, Porters, and Stouts.

A glass of the Pilsner that Schmid says will most likely be the brewery’s signature beer.

With opening day now less than a week away, Schmid says his journey from homebrewer to homebrew shop owner to brewery owner has been a long one and though mostly smooth he couldn’t help get a little emotional.

“When I walked out of city hall with my occupancy permit, I cried,” he says without a hint of shame. “It was just happiness. It’s finally done.”

Red Bus officially opens on February 9 from 4-9, you can learn more at their website redbusbrew.com.

This #isolation taking away my excuses for not crossing things off the #honeydolist. Shelves on the table and Bigger on the Inside #westcoastipa from @urbanrootsbeer in the glass.
Homeschooling art projects and delicious craft beer: a winning combination! Galaxy Tactics #doubleIPA from @urbanrootsbeer in a throwback BruCo #teku
There’s a lot wrong in the world these days but #BBQ and #beer is never wrong. Playground Tactics #doubleipa from @urbanrootsbeer. It’s #hella unfiltered.
Working from home while home schooling three kids is anything but EZ PZ but I’m very grateful for our wonderful teachers making the process so much easier. We’d be lost without you! So cheers to teachers! And cheers to surviving week 1 of quarantine! #buylocal #sacbeer
Well one benefit about working from home is beer right at quitting time. Like Riding a Bike from @urbanrootsbeer hit the spot. Support local beer!
So there’s literally nothing for the kids to do, no school, no little league, no sports on TV and NOW it’s raining?!? So they can’t even go outside?!? Times like this call for a beer from @sufferfestbeer. This Head Start Stout is quite good.